If you’re looking for new reads or current bestsellers, you won’t find them here. Most of these books you’ve heard before, some are movies, and others definitely should be. These books bring me to a new place; a new century, new world, new worldview. Some of these books shaped my youth, others challenge my thinking. Others still are just super fun space operas.

Okay, come on, you knew that was going to be in here. I will tell anyone that listens that Harry Potter is the greatest series of all time, hands down. The Harry Potter series got millions of children reading, and studies show that kids who read Harry potter grow up to be better people. It’s true. You’re welcome. I can write a million things about the greatness of Harry Potter, but I will just name a few:

“Whether you come back by page or by the big screen, Hogwarts will always be there to welcome you home. ”

I may have a thing for British literature. My copy of Jane Eyre has seen better days, it lost its cover many years ago, it’s losing its binding, has been heavily marked up, and heavily re-read.

I have read plenty of gothic romances, and out of all the Brontë sisters, Charlotte and her Jane Eyre is the best, and the other sisters know it. You know they’re out there brooding and haunting some English moor because of it.  Jane Eyre has everything you need for a gothic novel: a plain governess pining over a broody much older rich guy, who happens to be holding his crazy wife hostage in his attic. Perfect! I’m in! Spoiler alert: reader, she married him.

Written by the author of “The Yellow Wallpaper”, Charlotte Perkins Gilman creates a utopian society entirely of women, who have a peaceful government and culture, and even reproduce on their own. Male explorers happen upon their isolated society and are shocked by how advanced it is. They did all this without men?! Eventually, their introduction of conventional ideals destroys the utopia.

Charlotte Perkins Gilman is one of the greatest feminist writers of our time and should be required reading for anyone that knows a woman. Her writing has influenced my thoughts on what it means to be a woman, and what it takes to be taken seriously as one. The women’s movement,  #MeToo, and the #TimesUp movement are made stronger because of people like her.

I will tell everyone that Ready Player One wins my award for Best Standalone Book After Harry Potter. When we lived in Fort Collins, I heard about this book through a gamer on YouTube. I know, my nerd is showing. I read it in a day, holed up on the couch, shushing anyone around me. It was a great action-adventure, and I felt like I was saving the world. During our last year in Fort Collins, I had the opportunity to go to a library talk that Ernest Cline was at. He was promoting his newest book, Armada by doing signings and speeches at libraries and independent bookstores. It was AMAZING.

Cline is a genuine geek. He has a Delorean and is obsessed with Star Wars. I think we spent more time discussing Star Wars than we did discussing Ready Player One or Armada. He signed both copies and they both say MTFBWYA (may the force be with you always), which makes me laugh every time I see it. It’s a good reminder that Cline is truly himself, and his work reflects that. He’s passionate about games and sci-fi, aliens and RPG. He loves writing and he writes what he loves, and that’s what makes him a great writer. 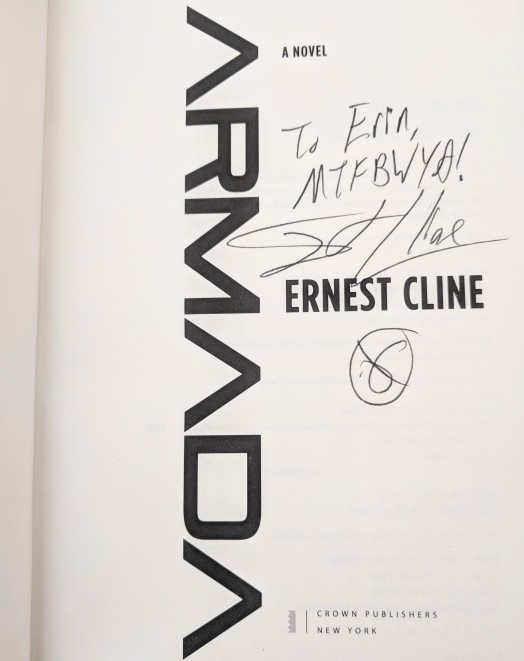 I would like to thank my friend and former college roommate Stephanie, who always knows what’s good in the literary world. And she has not let me down. Especially with space opera. Red Rising takes the award for Best Series After Harry Potter. It starts in a familiar trope we see nowadays with dystopian/sci-fi, with teenagers competing to the death in a government sponsored competition. Hunger Games, anyone? Roll your eyes a little bit here and then stop, because they will be WIDE OPEN the rest of the journey.

We’re going along with Darrow as he breaks through the class system on Mars and kicks some major butt. A slave forced to mine so the rich can live, he joins an underbelly cast of characters, transforms himself into the upper-class, and joins them to work from the inside to take them down. I haven’t read the fourth book yet, but I can guarantee it’s a dontbothermeiminspace read. These books are fast paced, suspenseful, and often very funny, when someone’s not dying. It’s a space opera after all. You get a little bit of everything.

Okay, so technically it’s a play. And I have read it and seen it. I recommend both formats. This American classic is the story of Anytown, USA. It seems more realistic to people in places like Kent, but the more I think about it, especially now, I truly believe this is a play that can be relatable to anyone, anywhere. The beauty of Our Town is the simplicity. It’s really just about life. You go about your day, you grow up, you get married, you die. That’s it. But is it really it? I love Our Town because it reminds us that yes, we have things to do, yes, they feel important to us, but maybe every once in a while, we should look around.

Emily:
Do any human beings ever realize life while they live it?–every, every minute?

Stage Manager:
No. Saints and poets, maybe–they do some.

All of these books move me. Some to laughter, some to tears. I love them all. I said in the title that they are so moving, that they move with me. The truth is, I don’t own most of them anymore.

Red Rising has been given to others to urge them into the series.

Herland was forced into the hands of another feminist.

Ready Player One was sent to my sister to read.

I snuck Our Town into a Little Free Library in downtown Kent, I went back a couple weeks later and it was gone.

Harry Potter will go with me wherever I move, no question.

6 thoughts on “Books so moving they move with me”