We learned we were moving to Germany last August, a month after we moved to Kent.  The first thing we did was buy an airline crate for Sherlock.

And then we returned it.

The first one we got was so big that I could easily fit in it and sit down crisscross-applesauce.  It was too big, but I wanted him to be comfortable.  There’s a fine line between comfort and danger when it comes to exporting dogs via plane (in another post, I’ll talk about what to get to prepare your dog for a move overseas).  I learned that the hard way after reading horror story after horror story on the internet and every commenter saying, “whatever you do, DON’T put your dog in cargo!” they’re going to end up in Japan, be left on the tarmac, die of heatstroke, get a strange disease, etc.  It was terrifying and stressful.

My number one advice to anyone planning on moving a dog in cargo is to STOP READING THOSE STORIES.

I love to do my research, and so I read these stories under the guise of gaining information.  All I learned is that most people are stupid, and I was giving myself unnecessary stress.  Sherlock is our family.  We knew moving to Germany wasn’t going to be easy but doing it with a dog (and a big one at that) was going to make it a lot harder.  If you take the time to figure out what your dog requires for his journey, you’re going to be fine.  Stressed out, sure, but fine.

We got the right sized crate, almost a year before we moved.

We set it up and ignored it.

We left Sherlock to explore it but didn’t force him into it.  He’s always been curious, so when he would go near it or inside, we praised him and tossed treats inside.  His breakfast and dinners were served in his “box.”  All treats were dispensed in his box, and occasionally, he would spend minutes or hours in his box; sometimes with us in the house, sometimes by himself.  When all our furniture started disappearing in anticipation for the move, his box stayed.

A year later, all that was left in our house was the box.

Go to the Vet

Months in advance, I started googling what I needed to do to import a dog to Germany.  There is no quarantine period for dogs entering Germany.  All that is required is a current rabies vaccination and a standardized microchip (check to see what’s required for your destination).

Finding the right information and forms was hard part.

Scheduling the the vet and getting the paperwork completed was difficult.

When I contacted my vet and informed them that I would be moving abroad with my dog, I was informed that I would be required to know all the paperwork needed and have it filled out prior to the appointment for the vet to check and sign.

So I went on the USDA APHIS Vet Services website and found the paperwork I thought I needed, filled it out, and went to my appointment.

Sherlock got a new rabies vaccine (good for 3 years in Ohio), and I got a copy of the rabies certificate (note: the EU requires physical signatures on certificates.  Make sure your documents have that and not an electronic signature.  Bonus points for blue ink).  The vet and the staff were impressed with my knowledge and handling of the documents and I was proud that I got their seal of approval.  Little did I know….

Schedule with the USDA

Ten days before leaving the US, you must get your animal health certificate certified and signed by the USDA.  Most of the time, there is one office in each state (good luck).  Our office was 2 hours away, and when we walked in and showed them the documents, this is what went down:

THE FORECAST SAYS IT’S GOING TO BE BOILING LAVA HOT AND THIS OFFICE HAS NO AIR CONDITIONER.  THE OPEN WINDOW DOES NOTHING.  THE CRAMPED AND OUTDATED RECEPTION AREA HAS A GOOD HOUSEKEEPING MAGAZINE FROM DECEMBER 2012.  ERIN RINGS THE SERVICE BELL AND YOU CAN HEAR THE EMPLOYEE WALKING DOWN THE HALLWAY ON THE OLD WOODEN FLOORS.

Uh, hi I have an appointment for a health certificate at 10.

Employee stomps down the hallway and slides glass divider open

do you have your paperwork?

Erin pulls out documents from a crisp manila envelope labeled “Sherlock” and proudly pushes them through window.

Here it is, and here’s a copy of the rabies certificate, the original microchip number, and the stickers from the rabies vaccine.

Employee is shocked and not in a good way.

Did you fill this out yourself?

Erin is basically in tears, freaking out that Sherlock won’t be able to come with them now, playing a reel of worst-case scenarios in her head which eventually ends with her pan-handling on the street corner with Sherlock.

They told me I had to fill it out!

Give me a moment, I’ll see what I can do.

Employee calls vet and reams them a new one about how to properly fill out health certificates while stamping and certifying the documents.

Luckily, the USDA APHIS employee was able to work with the document we had and we didn’t have to start from scratch.  I have heard horror stories of people having to overnight documents, get additional shots, and quarantine animals because of incorrect paperwork.  After an hour of waiting, our paperwork was certified and we were able to leave with a health certificate for Sherlock.

Go to the Airport 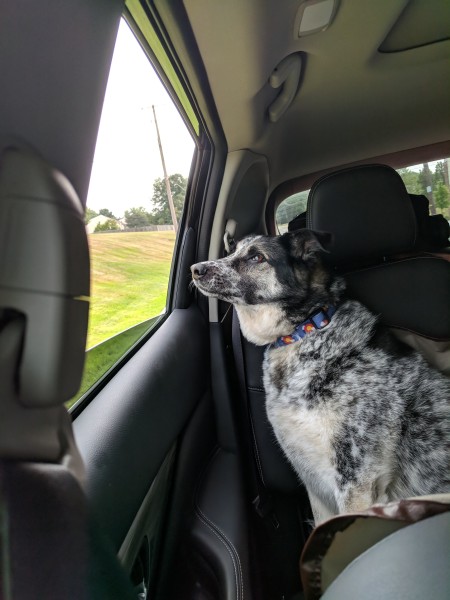 We got to the airport about 3 hours before our flight, after moving out of our apartment that day.  We decided to sedate Sherlock because he is a very anxious dog, and we knew this journey would not be easy for him (or any of us).  A week prior, I called the airline to confirm that Sherlock was on the manifest, and then again the day before because I was paranoid.

Our flight was not a direct flight, as we were flying out of Cleveland to Reykjavik, then onto Frankfurt via Iceland Air.  We would be changing planes in Iceland.  Josh and I approached the counter to check in and get Sherlock ready for his journey in cargo.  We handed over his health certificate and our passports and were informed that we were missing necessary documents for our dog.

Yup.  They told us that Sherlock would not be allowed on the flight to Iceland because Iceland Air requires paperwork and documentation for Iceland.  This was absolutely the wrong thing to say to us at that moment.

So, I very calmly set my binder down, called Iceland Air myself, and confirmed with them over the phone in front of the attendant that no additional documentation was required.

If you are taking a connecting flight, you only need health certificates and documentation for your final destination. *

The attendant conceded, waived our baggage fees for all 4 of our bags, and we said “see you soon” to Sherlock, who was pretty much asleep in his box.  Off he went to his private TSA screening and into the belly of the beast.  We confirmed before boarding that Sherlock was on the plane, and then again in Iceland when we changed planes.  Once we landed in Frankfurt, beat from staying awake all night stressed and worried about Sherlock below our feet, we hightailed it to baggage claim to find him.

Once we found him, we tried to let him out, but got yelled at (in German).  We had to wait until we were out of baggage claim.  So, we picked him up in his crate and hauled him on a luggage dolly out of baggage claim into the main Arrivals terminal of Frankfurt airport.

He got treats, water, and a good walk around, then we made our winding way to the train station.  The journey to Bielefeld was exhausting and arduous.  With four large suitcases, a dog, and a very large dog crate, it definitely was not easy, and we didn’t make any friends as you might remember from my previous post.

Sherlock was exhausted, and at times we had to carry him up flights of stairs.  He didn’t go to the bathroom the entire journey.  It wasn’t until we arrived at the Bielefeld hauptbahnhof and got outside that Sherlock stood there and let his bladder go for a good 3 minutes, right there on the sidewalk.

We all slept for ages the next day, and all three of us were sore from the trip.

In all the research I did about importing a dog to Germany, there was a huge gap of information about what to do once you arrive.  The only information I ever found while researching was getting my USDA health certificate stamped by a Customs agent.

The greatest lesson I learned is that I needed to be my own expert.

I can’t rely on the vets to know what they’re doing, because they gave me the wrong information on how to fill out a health certificate.

I can’t rely on the airline to know what they’re doing because they don’t know the regulations for importing and exporting animals on their own planes.

Can I rely on the German government to allow me to legally import my dog?  Read part 2 to see how that went down…

Are you planning on moving with your dog overseas?  Let me know if you have any questions by leaving me a comment!

*This varies depending on if you’re switching airlines, and how long your layover is.  But if you’re staying with the same airline and your layover is less than 24 hours no additional import paperwork is required.

One thought on “The Expert Way to Move your Dog Abroad”