Last week my parents came to visit.  It was their first time in Europe, and we tried to do and see as much as possible in the short time frame they were visiting.  One of the destinations: Amsterdam, Netherlands.  I had never been to Amsterdam before, and knew little about it.  The only images I had in my head of the Netherlands were of flowers and stroopwafels.  Here’s the thing about Amsterdam:  I don’t think any locals live there.

The Netherlands (aka Holland) is home to about 17 million people.  Amsterdam is the most densely populated city in the country with 1 million people, and attracts about 18 million tourists each year 🤯. Compared to other capital cities in Europe, Amsterdam is tiny and jam packed.

We arrived by train from Köln, and after navigating the insides of the train terminal, made our way onto the streets, towing luggage and playing frogger with passing bikes.  It was a Friday afternoon and the sidewalks were crowded with people.

The massive amount of people, the noise of bell bikes, and the smell of pot from “coffee shops” left me feeling disoriented and anxious.  Not even New York or Berlin had this many people in one place!  Streets came out of nowhere, slicing narrow paths between even narrower buildings, as if the city was built to take up as much room as possible with no regard to order.

Amsterdam is to Europe what Vegas is to the US.   Sex tourism, pot tourism, Ripley’s Believe it or Not, Madame Tussaud’s Wax Museum, and other “chain” museums are available here, perfect for bachelor parties and the like.  While we were there, the university was having its annual greek life rush week, so the city was filled with college students running and chanting fight songs, setting off fireworks, and hosting parties.

Stroop, there it is

I’m probably not painting the best image of Amsterdam, am I?  Once you stuff a warm Stroopwafel into your face, the hanger fades and you see Amsterdam in a sweet, honey glow.

We visited the Anne Frank House on our first night in Amsterdam, lining up in a light drizzle with about 100 of our closest friends.  We started our tour with a private explanation of Anne Frank’s life, how her parents met, why they moved from Germany to Amsterdam, and what was happening politically during her life.   After our WWII download, we grabbed audio guides and began climbing through the secret annex, a house tucked behind Otto Frank’s workplace where 8 people hid for 2 years before being discovered by the Nazis (raise your hand if you thought Anne hid in an attic🙋‍♀️) .

“How wonderful it is that nobody need wait a single moment before starting to improve the world.” -Anne Frank

Of Sound and Color

I have been a Van Gogh fan ever since I was a child, and my parents took me out of school so we could go to LACMA for a special exhibition (educational hooky!), so coming to the Van Gogh Museum, which has the largest collection of his work and personal letters, was pretty freakin’ awesome.  The museum has worked hard to limit the number of people in the museum (see earlier comment about massive crowds), and required all tickets to be ordered online, with entry at specific times (Anne Frank House is the same way; we booked both museums 60-90 days prior).

This museum has all the Van Gogh classics:  Almond Blossoms, Potato Eaters, The Bedroom, Japanese prints, basically every portrait, and even a Sunflower or two.  My favorite part of the museum was seeing how vibrant the colors were in person, and then learning that (due to age, poor restoration techniques, etc) the color should actually be brighter.

We also discovered some new (to us) paintings, and everyone came out of the museum with a new favorite.

Our visit wasn’t all indoors.  We took a walking tour through Amsterdam, which broke down the city’s rich and vibrant merchant history; explained the unique housing style; and basically said anything goes in Amsterdam, as long as it makes the city money.  After walking for hours, we decided to sit on a boat and cruise the famous canals that cut through the city.  I fell asleep.  It was too relaxing. 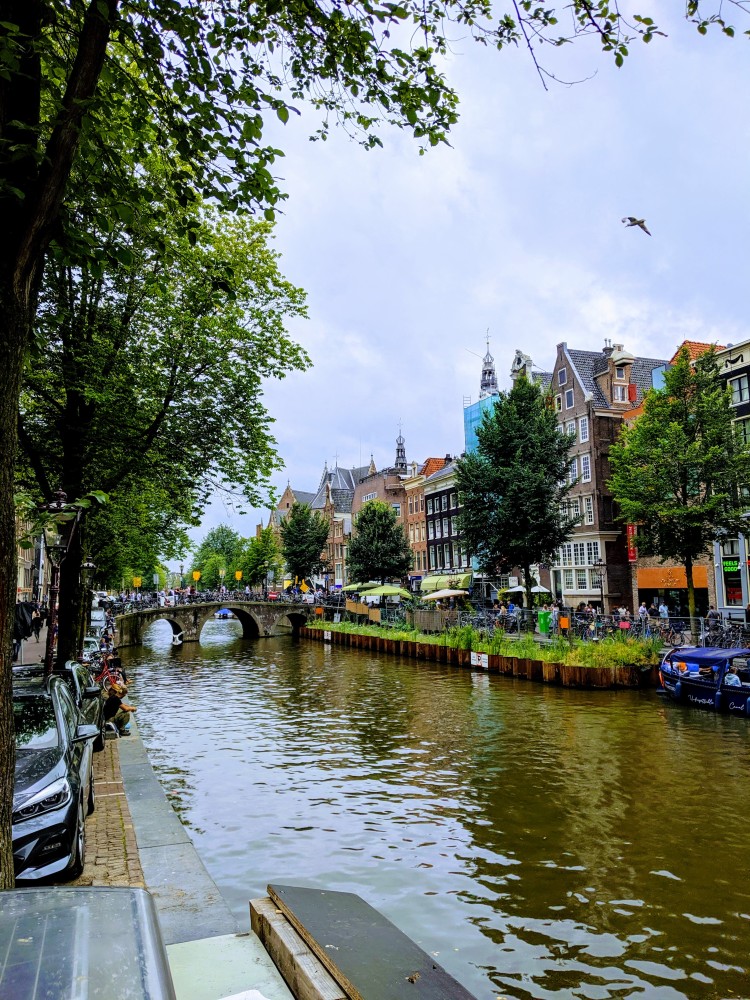 We ate asian food in Chinatown, got more Stroopwafels to go, and ended our trip the next morning with Dutch pancakes before the crowds woke up and joined us on the streets.  Overall, an enjoyable (if not shell-shocking) visit to Amsterdam.

Here’s the thing about Amsterdam:  The city is currently struggling with a major mass-tourism issue, and it’s pretty obvious.  While it has plenty that’s unique to the city, I would recommend braving the cold and trying to visit off-season.  Or, see what else the Netherlands has to offer.  I mean, the second-largest Van Gogh collection in the world sits just 2 hours outside of the city.

6 thoughts on “A Weekend in Amsterdam”